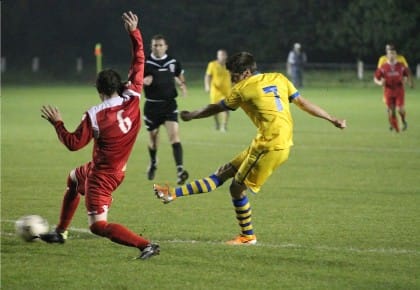 Monmouth Town - 5 Taffs Well - 2   FOUR goals from Dan MacDonald, making it 10 in just three games since his return from Merthyr, inspired the Kingfishers to a fine victory against last season's runners up in front of good sized crowd at Pen-y-Pound last Friday evening. The win took the champions to the top of the table for the night but Haverfordwest County reclaimed top spot with a thumping win of their own the following day setting up a delicious top v second encounter at the stadium this Saturday (2.30pm kick off). In the opening ten minutes Monmouth ceded possession and large amounts of territory, as they defended deeply hoping to strike to on the break. Despite not seeing much of the ball, Taffs for their part were relatively wasteful with it as defender Danny Clare and co restricted the visitors to a few hopeful strikes from distance. Despite all of the danger being at Monmouth's end of the pitch, MacDonald capitlaized on a mistake 14 minutes in with a superb strike. Taffs worked some good openings down they flanks but Guy was outstanding in clearing danger, Blackburn unruffled, and Clare dominant. When Town did break, Bull worked tirelessly and had a good penalty shout turned down as Monmouth went in at half time 1- 0 In the second-half another swift break caught out the visitors' defence, as Bull put in Evans (pictured) whose strike from an angle found the corner of the net. Minutes later Bull was set free and he held off the Taffs defender in a foot race, slipped the ball past the advancing 'keeper and was brought down. Penalty to Monmouth, red card for the 'keeper. MacDonald made it 3-0. Although stand in 'keeper Williams did get a strong hand to the attempt. Taff got one back to give them a lifeline, however, McDonald was having none of it. As the crowd were bracing themselves for an exciting last 20 minutes MacDonald struck direct from kick off lofting the ball high into the Abergavenny night air, over Williams and into the empty goal. The hat trick goal was met with an eerie silence as everyone at the ground, players included, digested the audacious strike. Town's manager Andrew Smith commented, "To have the cheek to think about that is one thing, to be able to do it is quite another. Luckily Macca has both." MacDonald ended the game with his low shot beating Williams to make it 5-1. Taffs did get one back but it was far too little and far too late. Town's Manager Andrew Smith was delighted after the game, "I don't like to single players out but Macca was unplayable at times. To score 10 goals in three games just shows how special and how lucky we are to have him at this football club."