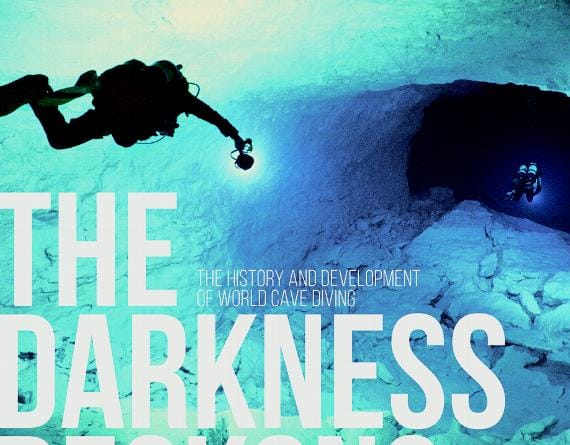 CAVE diving book The Darkness Beckons by Crickowell-based author Martyn Farr has been shortlisted for the Sports Book Awards 2018 in the Illustrated Book of the Year category.

First released in 1980 and completely overhauled in 2017 by Vertebrate Publishing, the book charts the history of international cave diving from early underwater expeditions to cutting-edge dives across the world. The fully updated edition reflects the latest developments and features an all-new foreword by renowned cave diver and explorer Bill Stone, as well as over 250 digitally remastered photographs and more than 100 hand-drawn diagrams.

The Sports Book Award is a major annual prize presented in recognition of outstanding sports writing and publishing of the previous calendar year.

Commenting on his book’s shortlisting Farr said, “It came as a complete surprise to be shortlisted in the 2018 Sports Book of The Year. But it must be said – I am really delighted that the poorly understood activities of the last true explorers on the planet are at last being recognised. This book is a magnificent tribute to the esoteric activity of caving and cave diving.”

Pennies warm-up against top English side

Farr began cave diving in 1971 and by 1981 had established a world record for under-sea cave penetration in the Bahamas. In the UK he is known for his explorations in Wookey Hole, in 1977 and 1982, and the first subterranean traverse of Llangattock Mountain in Wales in 1986. He has made many expeditions worldwide, to such places as Iran, Mexico, Borneo, China, Dominican Republic, Japan, France, Spain, the Canary Islands, the Balearics, Greece, Turkey, Brazil, Russia, Australia and, most recently, New Zealand.

This year’s winner will be announced at a special ceremony at the Lord’s Cricket Ground, London on Wednesday 7 June.

For more information about the book, please visit the Vertebrate Publishing website: www.v-publishing.co.uk.