Rhys's Ready To Race And Remember 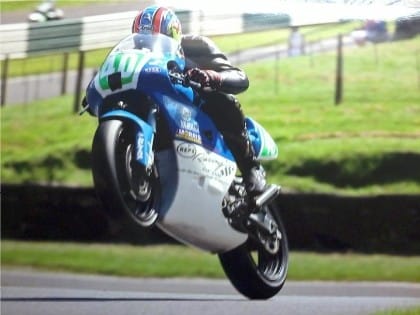 WHEN Rhys Hardisty gears up to fulfill a lifelong dream and race in the legendary Manx Grand Prix this August, it will be a particularly emotional and poignant occasion, as the young motorcyclist will be racing on the same track which claimed the life of his father. The twenty-six-year-old from Llanellen will be travelling to the Isle of Man at the end of Summer to test his mettle in the Newcomers B class and the super-twins race. Although it will be a defining moment for the talented biker, it will also no doubt be a bittersweet one, as Rhys will be racing in honour of his father, Charles Ian Hardisty, known as Ian, a very successful amateur motorcyclist who was killed during the 1998 Isle of Man TT production race. Since 1911, there have been 240 fatalities involving riders who have raced in the Isle of Man Tourist Trophy Races and amateur Manx Grand Prix on the 37.7 mile Snaefell Mountain Course Alongside Ian Hardisty, another five riders were also tragically killed in 1998, and since 2000, motorcycle events on the Isle of Man have claimed the lives of another 50 racers. Such statistics have led many critics to denounce the races as 'insane and dangerous' and many, including former motorcycle champion Wayne Gardner have called for a ban. Yet in a world where everything is over-engineered, over-regulated and over-litigated in the name of safety and security, to race at the Isle of Man remains appealing to a select group of riders who are aware of the risks and realise the dangers, but are compelled to conquer any fear, fulfill any ambitions, and chase their dreams on a track which is regarded as the absolute pinnacle of motorcycle racing. Rhys Hardisty knows all about chasing his dreams and told the Chronicle, "My dad won best newcomer himself at the Manx Grand Prix in 1995 in the 400 class. He also gained a top 20 in the Isle of Man TT as a privateer. I've been going to the Isle of Man since I was a baby, and so you could say it's in the blood. "One thing's for sure. Ever since I was a small boy I've had a burning ambition and overriding dream to race there and when I finally do, I'll be carrying by father's memory with me every mile of the way." Rhys, who works in Caldicot's Royston Edwards Performance Services (R.E.P.S.) as a motorcycle technician, something which he calls a 'busman's holiday,' carries out all his own motorcycle maintenance and tuning. The Manx newcomer added, "At the Manx I'll be riding my Kawasaki ERR650 which was previously raced in the Manx Grand Prix and TT races by Rab Davi who has had podium finishes on it. It cost me a fair bit but I'd say it was a sound investment." Riding from a very early age and competing in trial events, for the past three years Rhys has been racing his two stroke Yamaha TZ250 in the ACU national 250GP. He has competed on many of the major UK circuits and raced in the popular North Gloucester 250 Cup Championship, where he finished third despite riding the oldest motorbike in his class. This year, Rhys also plans to race in the Aberdare and Scarborough road races as well as continuing with circuit racing. Rhys's girlfriend Becky Hammond, is fully supportive of Rhys and his dream to race in the Manx and she told the Chronicle, "The death of Rhys's father has made it much more of a struggle for Rhys to fulfill his own dreams. He's had to battle with his own emotions relating to the Isle of Man, and realising how at the same time he needs to be sensitive to his mothers' wishes. Rhys has also missed out on his father's support when trying to forge his own amateur racing career, but this is something he has always wanted to do and although it is obviously difficult for his mother (Maria), everyone is behind Rhys all the way." Although chasing your dreams is all well and good, in the world of motorsport it can also be a very costly business. Rhys explained, "It's been an expensive road to get to this point and at the moment I haven't really got a pot to do you know what in. At the moment my main sponsors are R.E.P.S. along with Abergavenny's M&D Cycles, and I'm very grateful for their continued support. "However, I'm always looking for further support from local businesses. This could involve anything from financial assistance to donations such as kit, consumables or fitness training. Whatever it is, it would be greatly appreciated. "In return, sponsorship brings benefits such as advertising (Manx will be shown on ITV4), tickets to events and race related memorabilia. And who knows, you might just be backing this year's Manx Grand Prix winner."