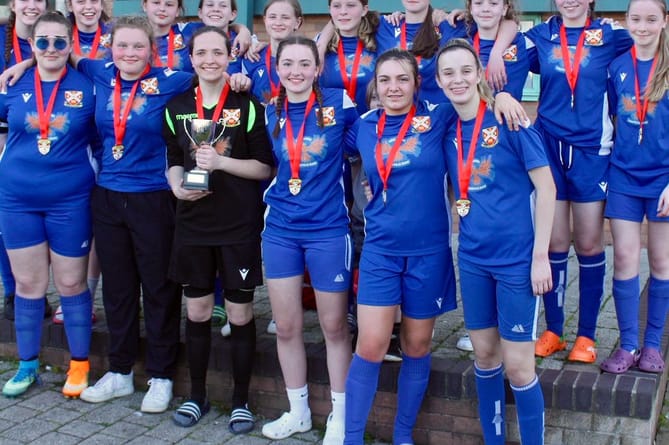 IT has been a remarkable year for Abergavenny Women FC, and not just for the Adran South-winning seniors, writes ANDREW KENNEDY.

As well as the 1st XI winning the league and gaining promotion,

their youngsters have now lifted the South Wales Women’s and Girls’ U16 League Trophy, beating Thornhill AFC 2-1 after extra-time.

Travelling to Ocean Park Arena in Cardiff to play the final, a hot day on the artificial pitch made for some very fast play.

Regatta’s oar-some return as hundreds launch out to race

Bella Wilce set up the opening goal for Eleri Jones after 25 minutes only for Thornhill to level up in second-half injury time from the spot.

Aber could have wilted after having victory snatched away from them right at the death, but with 10 minutes extra-time each way, they stayed strong.

With a large contingent of Abergavenny supporters cheering them on, relief came in the 89th minute when a foul in the Thornhill box saw the referee point to the spot.

Up stepped Gracie Grosvenor who duly scored, making it 2-1 with 11 minutes to play.

And the tightly knit young Pennies team continued working hard for each other, to keep Thornhill at bay to the final whistle to claim a sweet victory in their final game of the season.

Both they and the U19s are bursting with football talent, as part of the club’s creation of a clear pathway from junior to senior football.

And in further good news, U16s player Renée Hurn has picked up her first Welsh Schools FA U16s cap in a draw with England Schools, and also her Caerphilly & District Schools cap.

The U16s have been with the club for two years, while the U19 age group was a Football Association of Wales initiative grasped by the club to offer a stepping stone to senior women’s football.

The U19s started with Genero Adran U19s South East fixtures, earning themselves Division 1 status from January, and taking points in six of the 10 games against the five other teams.

Several of the U16s have played at U19 level, including Gracie Grosvenor, Eleri Jones and Bella Wilce, while the U19s have regularly trained with the 1st XI, with Ellie Bidhendy, Marnie Gingell, Chloe Leonard, Meg McVey, Ffion Simmonds, Neve Speicher and Megan Stanton all taking their chances at senior level, while Olivia Barnes, Eliza Atkins, Caitlin Davies, Elena Scrivens and Jess Pascoe are first team regulars.

Senior manager Craig Morgan-Hill said: “We’ve got to build for the future. You look at the 19s, (they) have U16s players involved, and we’ve had I think 11 players involved in the 1st XI.

“Take Ffion as a perfect example, the captain – she’s come with the 1st team, she’s been on the bench, she’s was given a chance to start, and she’s taken her chance, so there is a real pathway for players if they want to do it.

“We want Abergavenny to be a club where players are welcome and everyone stays together and you work your way through.”