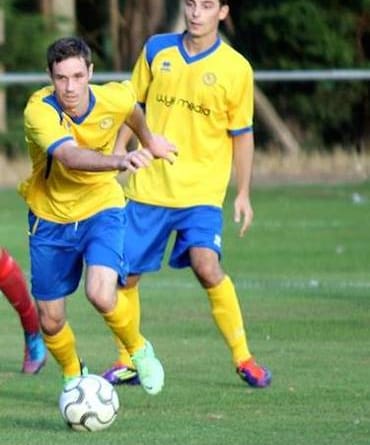 Monmouth Town's new year got off to an awful start as they were comprehensively beaten at resurgent Taffs Well who finished runners up in last season's titanic title battle.

Taffs started much the better side keeping the ball well and pulling the Kingfishers around the park but without making any real inroads and Blackburn was having a relatively quiet evening. Town, with Clare suspended had pushed Rob Laurie back into central defence as a partner for Jacob Guy with Joe Loftus taking his place in midfield and the set up looked solid enough. As the half wore on the Kingfishers get a foothold in the game and but for some strange and overzealous referring might have got some rhythm into their play after a fortnight lay off but Macdonald and co found it heavy weather and by half time only had a good effort from Chris Ham to show for a lot of huff and puff.

The second half was similar until the hour mark when Laurie was adjudged to have brought down Small on the edge of the area and Loftus was booked for cleaning. Up stepped former Merthyr man Adie Harris and his free kick sailed into the top corner leaving Blackburn with no chance. It was a body blow for Town and they looked dejected but came back into it when Ham again beat his man down the left and lofted a superb cross to the back post and Elliott Ford header was superbly saved by the Taffs keeper. He was injured in the process and replaced by Sam Palmer and as Smith range the changes in the system to go for the equaliser he was immediately undone as a quick break from Taffs made it 2-0 as Jones flashed a drive across Blackburn.

Small finished the game late in another break with a deflected effort but Harrhy was brought down surging into the area late on but his penalty claims were waved away. Bizarrely five Monmouth players were also booked in a match devoid of any bad tackles but Town manager Andrew Smith was disappointed with the team's effort, "We just need to be bit nastier all round and if we get booked for tackling then fair enough. Taffs are a well established Division One side and looked dead and buried after eight games but have come back into it by showing fight and a lot of character. We need to do the same if we want to stay interested in the league."

Monmouth are in cup action this Saturday with a home League cup game against Pontypridd Town at Pen-y-Pound. Kick-off is 1.30pm.