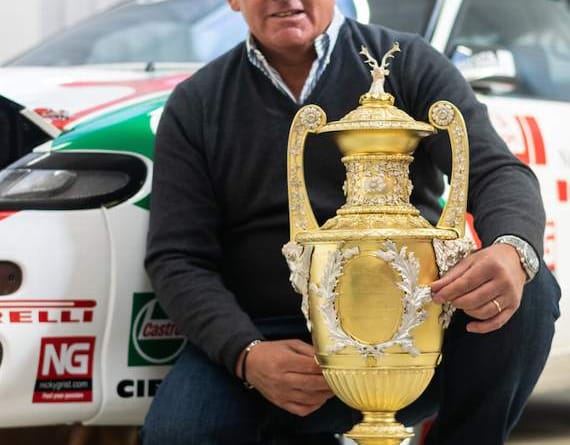 RALLY legend Nick Grist was delighted to get his hands on the famous Peall Trophy one more time when the iconic silverware made a pit-stop at his Pontrilas head-quarters earlier this week.

The prestigious Peall Trophy has been awarded to the winners of Rally GB since the early 1950s and Grist has won it twice.

Once in 1993, co-driving for Juha Kankkunen in their Toyota Celica Turbo 4WD, and once in 1997 in the Subaru Impreza WRC with Colin McRae.

Last year the trophy which stands more than two and a half feet tall and weighs in excess of 18lbs was won by Elfyn Evans and Dan Barritt as Evans become the first Welsh driver ever to win a round of the WRC.

Youngsters get a kick out of football tournament

Mardy through on penalties after last-gasp extra-time equaliser

The Peall Trophy is currently on a tour of Britain and Grist was on hand to welcome it to Wales.

It is now 25 years since ‘Flying Finn’ Juha Kankkunen and his co-driver Grist won what is still remembered as one of the toughest and most challenging Rally GBs in the famous event’s long-running history.?To mark the silver anniversary of that snowy and icy victory, a quarter of a century on, Grist along with Juha Kankkunen will be honoured as the official ‘Rally Legends’ of this autumn’s Dayinsure Wales Rally GB (4-7 October). Both will be present throughout the four-day FIA World Championship event, assisting with ceremonial duties, signing autographs and sharing their incredible memories with fans.?Most evocatively, perhaps, Kankkunen and Grist will be reunited in the cockpit of a Toyota Celica GT-Four – similar to the car in which they won back in 1993 – to lead a special Sunday morning parade of historic rally cars through the closed roads of Llandudno. The parade will be the perfect curtain-raiser to the rally’s street stage finale which, for the first time in the UK, will witness the spectacle of World Championship motor sport on closed roads.

“I’m really looking forward to getting back into the Toyota with Juha and whizzing around the street stage in Llandudno,” grinned Grist. “In fact, the more I think about it, the more I’m excited about the whole event.”?Grist now owns the GT-Four which they will be sharing for the parade. Poignantly, it’s the very car in which he and Kankkunen won their final rally together in Portugal early the following season.