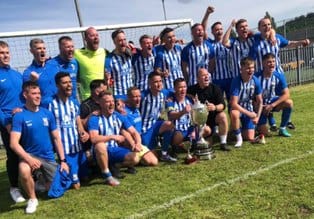 GOALS from Mike ‘Spike’ Baugh and Matt Burns sealed a fantastic season for Blaenavon Blues, as they lifted the Gwent Senior Cup for the first time in their 76-year history.

A 2-1 win over Caerleon at Risca’s ground in front of a 500-strong crowd follows an unbeaten Gwent Premier League season and promotion in second place to the Ardal South East League.

Baugh gave the Blues a 1-0 half-time lead through a neat strike inside the box, and Burns added a second 10 minutes from time before a late goal from Josh Gibson had the nerves jangling.

But there wild scenes of celebration as the referee blew for full-time, No 9 Baugh later posting: “What a season from the boys, promotion and a cup to take back to a little mining town.

Regatta’s oar-some return as hundreds launch out to race

“Been a long old season but worth every minute of it, proud to be part of this side and we are only just getting started! Rest up lads we go again in June.”

Midfielder Rhys Williams added: “What a season from Blaenavon Blues – promotion and Gwent Senior Cup winners is a fantastic achievement!

“Unbeaten in 30 league games and to still miss out on goal difference shows how tough the league is to get out of, but silverware was the least we deserved!”