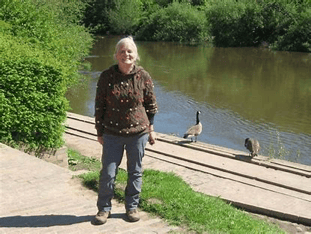 At the last fortnightly meeting of Isca Probus Club held at the Monmouthshire Golf Club, members had an illustrated talk from Anne Hayward, a self-confessed long distance walking addict.

She described how in 2015 she spent three months as a pilgrim, travelling on foot to visit some of the holiest sites in Wales. Her main objectives were four ancient places of pilgrimage- Holywell (Treffynnon), Bardsey Island (ynys Enlli), St David’s (Tyddewi) and Llantwit Major (Llanilltud Fawr), but also visiting numerous churches and other places of interest along the way.

In 2018, she published a book based on this journey in which she reflected on the spiritual experience of being a modern-day pilgrim. The book is built around the many interesting conversations she found herself sharing with those she met as she walked.