Oasis star Liam rolls with it on return to Rockfield Studios 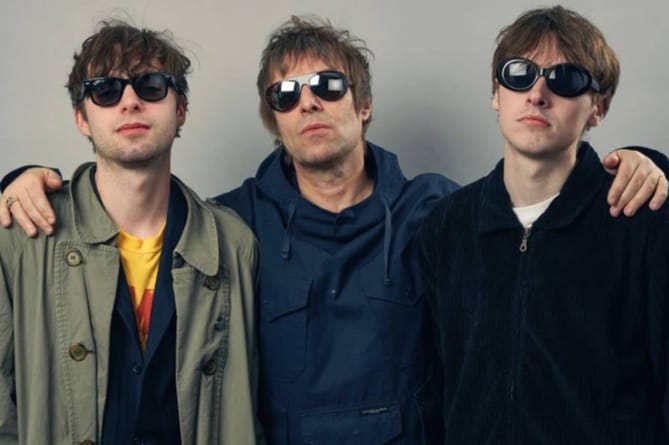 Rock star Liam Gallagher took his two sons on a nostalgic trip back in time to Monmouth ahead of two giant Knebworth gigs in front of 160,000 fans this weekend.

The Oasis legend returned to Rockfield, where the band spent six months recording the 22 million-selling album ‘(What’s the Story) Morning Glory?’ in 1995.

And the result is a new rockmentary where Liam reunites with Rockfield owner Kingsley Ward and recalls those heady booze-filled days, which the singer admits he largely spent in the town’s pubs while brother Noel continued recording.

Filled with “music, memories and mayhem”, the Sky Arts film ‘Liam Gallagher: 48 Hours at Rockfield’ even sees him chatting with the Rockfield cows and popping into the Royal Oak, one of the band’s watering holes in the 1990s, to have a drink and play pool with lads Lennon and Gene.

Liam reveals how the band almost split at Rockfield after a spectacular bust-up involving a cricket bat, only to regroup and finish the record.

“We were here for about six months,” says the rocker. “We split up, we got back together, there was a bit of fighting, there was a cricket bat, there was an air pistol, there was lots of drinking.

It includes him performing songs from new album C’mon You Know, released last week, and a couple of Oasis classics while chatting about music, song writing and his upcoming tour.

Founded by dairy farming brothers Kingsley and Charles Ward in the late 1960s, Rockfield became the world’s leading live-in recording studios, with Queen creating Bohemian Rhapsody there in the mid-1970s.

Black Sabbath, Rush, Judas Priest, Motorhead, the Stone Roses, The Charlatans, Simple Minds, Hawkwind, Robert Plant and most recently Paolo Nutini are just some to record there, while Coldplay’s monster smash Yellow was written and recorded at Rockfield too.

Oasis prepped songs for their first album at the neighbouring Monnow Valley studios in 1993 and were back across the road two years later to record tracks like Roll With It, Wonderwall, Don’t Look Back in Anger and Champagne Supernova.

Brother Noel wrote the songs, but Liam says with a dig and a smile: “He wrote some top tunes but nobody else can sing them like I can sing them.

“I can get people to play them on the guitar like Noel does, d’you know what I mean? So I deserve all the ******* credit. “I spent more time in the pub than I did here, which is a shame but… I’d do my singing and I’d come back and our kid would still be playing the same ******* riff over and over and over again.”

Liam recalls sessions in Monmouth’’s pubs like the Nags Head and Robin Hood and inviting fans back to the studios.

“It was like ‘come back to our gaffe, we’re having a great time’. ‘What about Noel… He won’t want us back there.’

Reuniting with Kingsley again, the studio owner tells Liam’s lads: “If you go into the music business and you’re half as successful as your dad, he’ll be proud of you, is that right?”

And out in the fields, Liam warns “Yes cows! Don’t eat it all at once – you’ll get indigestion” - a far cry from the image of rocking in front of 80,000 fans for two successive nights this Friday and Saturday, the 25th anniversary of Oasis’ legendary performance there.

“I didn’t think it would go as well as it’s gone, this solo thing, Liam admits.

“I’d say I’ve definitely got a bit more professional but you do when you get older.

“My job is to just get in there, look cool, sing as good as I can and bring the rock and roll side to it. I’ve definitely chilled out a bit, for sure.”