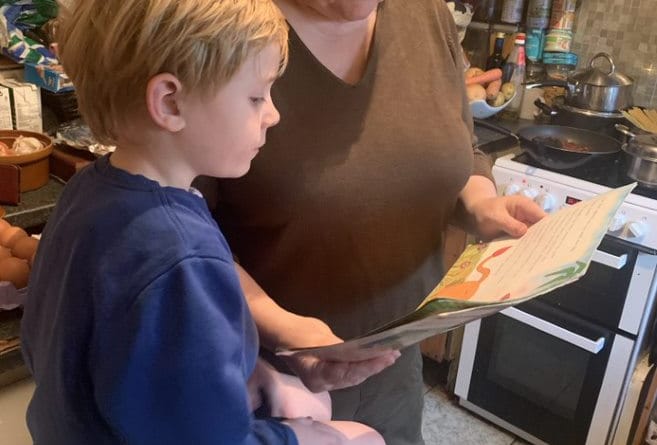 Judy Vaughan with her grandson Hunter (Pic from Nicola Vaughan )

During the pandemic a lot of us relied on other people to help us get groceries, take dogs for walks, alleviate lonliness and helping us cope if we had to isolate from the rest of the community if we caught Covid.

And this week we look at more nominations for our Community in Kindness awards.

Nicola Vaughan of Abergavenny is very proud of her mum and all she does to help her and her family.

In a very candid nomination Nicola says she is herself terminally ill and because she suffers severe epilepsy her life expectancy is that she may not live past her 30s.

Time for action not words on A40 safety in Raglan

Nicola gives her reasons behind the nomination.

She says: ‘‘My mother voluntarily cares full time for both myself (terminally I’ll expected to live only to 30 due to severity of epilepsy), her partner who is a stroke victim, and my son Hunter.

‘‘This amounts to about 50 per cent of her time when I am ill.

‘‘She also cared for her brother through his cancer treatment.

She also voluntarily feeds the homeless, vulnerable, elderly, those nearing and in poverty whilst reducing landfill through charity FareShare and Food For All Gwent.

‘‘She has fed schools in Eways Harold (bordering town) as well as those in need in Wales and in bordering towns through this scheme at the detriment of her time, money and welfare - whilst also supporting those around her.

‘‘She makes up boxes for those in need whilst also setting up tables outside the school and giving fruit and bread to the schools for breakfast clubs and milkshakes for the children.

‘‘She has helped myself, my neighbours and my partner through monetary issues due to the help recieved through this scheme, reduced landfill and even helped to give moral support to everyone around her.

‘‘She has fed the nation, helped the disabled and reduced our waste all whilst putting her needs second.

My mum does all this regardless of her own illness, her partner’s illness and caring 50 per cent of the time for her grandson whilst being in her 60s.

‘‘She is a true inspiration to our community.’’

Michelle Pearson has nominated her son Oscar Pearson who raised £1,300 for the charity BBC Children in Need.

Says Michelle: ‘‘He is a selfless young man who will do anything for anyone and give you his last of anything.

‘‘He always says if he ever won a large sum of money he’d give a large amount of it to charity. He is so kind hearted, and loved by everyone! 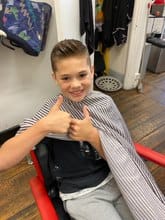 Oscar who raised £1,300 for Children in Need by having his shoulder-length hair cut off (Pic from Michelle Pearson )

‘‘He started growing his hair before lockdown and during that time he had spoken about what he could do with his hair when and if he was to have it cut short again.

‘‘He asked could his nan have his hair, because since her cancer treatment her hair didn’t grow back well and now wears a wig.

‘‘I told him about a charity, the Little Princess Trust, who make wigs for children who have lost their hair through conditions or because of treatments and he decied that’s what heI wanted to do!!

‘‘His nan was his inspiration to do this! This however was not enough, he asked how he could raise money for children who have lost limbs. Then the idea popped into his head to get people to sponsor him to have all his hair cut off.

‘‘He looked into charities for children who have lost limbs but it proved difficult to find. Then he said what about children in need as they help children with many different needs? And that is when it all began.

‘‘Oscar received a huge amount of support from friends, family and from his local community. He had an initial target of £500, which he didn’t think he’d reach, so when it kept getting higher he couldn’t believe it! He would get so excited and amazed at people’s generosity. When the funds reached the £1000 mark he said never in his wildest dreams did he expect it to reach that much but was glad it had. Oscar is always ready to help others no matter what.

‘‘Oscar is just himself and lives to do what he can for others. When asked why he was cutting his hair for charity he repied ‘I like to help other children who aren’t as fortunate as me’.

‘‘What more can I say, I know Im his mum, but I can guaruntee all who know him think the same.’’

Over the coming weeks we’ll outline tmore nominees and the reasons why they have been nominated.