It's a Rumble on the Tumble y'all! 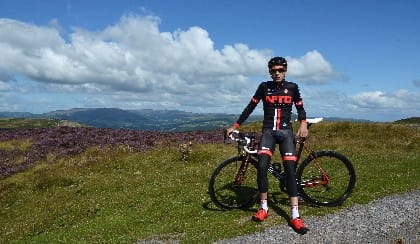 WELSH cyclist Jon Mould (NFTO Pro) visited Monmouthshire ahead of next month's Tour of Britain and explained that visitors to the Tumble on September 9 can expect some tough and exciting racing. As the star of stage three, Monmouthshire will host a dramatic summit finish that will challenge world-class riders to climb the Tumble, just outside Abergavenny. The Tumble, which also forms part of Blaenavon's World Heritage Site, is well-known in the cycling world as being one of the toughest ascents in the UK and is expected to be one of the major highlights of the entire race. After riding the Tumble, Mould commented on the challenging Monmouthshire leg of the race, "It's going to be a tough race, just to get here [the Tumble] it's going to be hard so I'd expect it to be one for the GC [general classification] contenders who will try and break to get some time on the rest of the group. "There are some great Welsh riders coming through, we all know each other and get on well so the future for Welsh cycling is exciting." Alongside Abergavenny, spectators will have the opportunity to line the streets of Monmouth and watch the race as the town features along the official route. Cllr Bob Greenland, cabinet member with responsibility for tourism said, "This year we have seen a feast of cycling events in Monmouthshire: British Cycling's National Road Championships starting and finishing in Abergavenny and taking in the whole county; then we hosted a stage of the Elite series through the streets of Chepstow; and now an important stage of the Tour of Britain will culminate in a climb up the Blorenge mountain that cyclists call the Tumble. "The Tour of Britain is the biggest professional cycling race in the UK. Through TV coverage it is now a global event attracting an audience of 280 million. It's a wonderful platform from which we can showcase all that the county has to offer. "Monmouthshire really has become the cycling capital of Wales. Our accommodation businesses are reporting a surge in bookings this year. But perhaps even more important than the economic benefit of hosting these big events is the rise in cycling by children and adults bringing with it huge improvements to health and well-being. "This is a free spectator event and we hope we will have big crowds cheering on the cyclists on September 9." To find out more about the Tour of Britain visit: http://www.tourofbritain.co.uk&quot;>www.tourofbritain.co.uk.