Through the goalposts and into the past..... 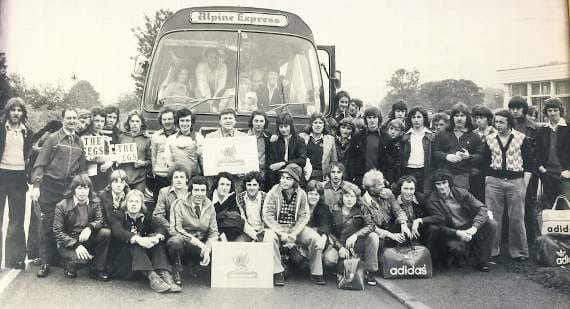 TWINS! They’re a rare and special thing. Abergavenny’s got two of them. A French one called Beaupreau and a German one named Ostringen. We did have an Italian one too, but things never quite worked out with dear old Sarno. Blame it on a lack of dialogue or blame it on the boogie, but some things are just not meant to be.

Anyhow, Ostringen is Aber’s oldest twin and this year will mark the 50th anniversary of the special relationship between the two towns.

In 1968, Abergavenny’s then Mayor John Lewis, was one of a party of eight who made the trip overseas and helped forge the first bonds between Abergavenny and our German counterparts in the state of Baden Wurttemberg.

There’s been a lot of water under the bridge since then, but the mutual love for the beautiful game has definitely helped keep the relationship between the Welsh and Teutonic market towns, alive and kicking.

Way back in April 1971, Abergavenny Park Rangers and Llwynu Utd combined forces and sent their U-14s and U-16s to play the West Germans in the first trans-town cup matches.

It was memorable experience for the youngsters, and the next year FC Ostringen made its first visit to Abergavenny, and friendships forged the previous year were cemented.

Over the coming decades, the Twin Town Cup matches remained a popular fixture in the footballing season, with players not just picked for their footballing skills but for their ability to be great ambassadors of the town.

Here’s a few of those likely lads from yesteryear. Recognize anyone?

Remember, if you’ve got any engaging and striking pictures from the past that could do with an airing and benefit from the oxygen of publicity, then why let them linger and gather dust in the drawer a day longer?

Send them to [email protected]. Alternatively you can do things the old fashioned way and pick up the telephone and ring Tim Butters on 01873 852187 (30) or pop into the Chronicle offices.