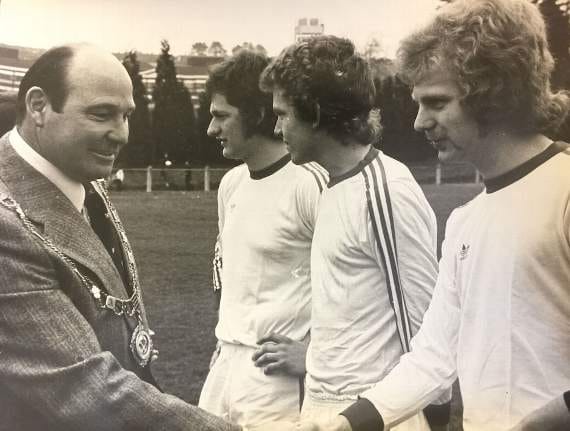 THE year was 1975, the venue was Ostringen and the opponents for the lads from Abergavenny were none other than the giants of German football, Bayern Munich.

The match between Abergavenny Select and Bayern Munich Youth ended in favour of the most successful team in Germany’s footballing history, but it was a close run thing. And if it wasn’t for the twin town football exchanges between our little patch of Monmouthshire and its Deutchland counterparts, the game between a bunch of local lads and the Bundseliga big-shots would never have happened.

Coach Terry Hodgins went along with the lads for their date with destiny and recalled telling them beforehand, “Stay sober, watch your language, don’t be a prima donna and you might even come home with a trophy.”

They didn’t but as Terry admits,“The game was a testament to the benefits to local football that being a twin town had triggered.”

Abergavenny was twinned with Ostringen in 1968 but things really took off a couple of years later when the town’s respective football teams became involved.

By the time 1975 had rolled around there had been various trips back and forth between representatives from the two great footballing nations in their bid to win the ‘Herman Kimmling Cup’ and the ‘Abergavenny Cup’.

And it was because of Ostringen FC’s Chairman and Burgermeister Herman Kimmling that Aber went head to head with the ‘Star of the South’s’ youth side.

Terry told the Chronicle, “Prior to the 1975 trip, we received a proposed programme of football from Herr Kimmling. I spotted that he had placed Abergavenny Select in a tournament and entered us in the same group as Bayern Munich. He sincerely felt he was doing us a huge favour, but I just thought, ‘That’s going to be a big ask for the boys.’”

The tournament consisted of four teams per group and a team had to win the group to progress to the semi-finals.

Aber Select won their first two matches, and Bayern had won theirs, so it was game on!

Terry explained, “We felt our chances were slim to say the least going into the game against Bayern. They had beaten their previous two opponents 4-0 and 3-0, so we knew it was going to be brutal.”

In what was described as the most exciting match of the tournament, the two sides ended normal time locked in a 2-2 stalemate.

Into extra time and Bayern, as Germans are often prone to do, scored from a penalty, and thus ended Aber’s hopes of glory.

It wasn’t fated to be Bayern’s day either. In their semi-final clash against French club Strasbourg, the red hot favourites lost the match 2-1 in what was a big upset.

Terry recalls, “During the trophy presentations the Bayern manager sportingly complained they lost their semi due to their exhortations against ‘the Englanders!’ Which was another bloody insult,” joked Terry.