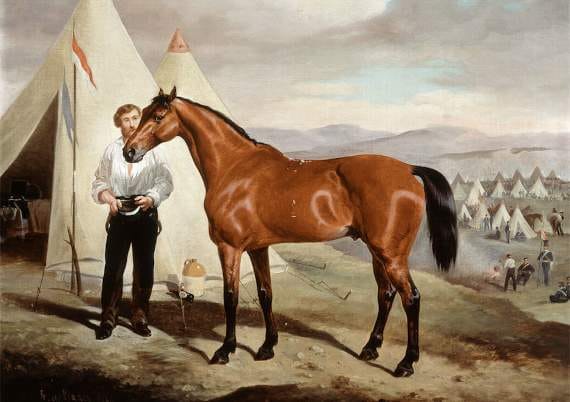 THE hammering of hooves mingled with the yells of men goading on the galloping mounts. Crashes of thunder rumbled across the battleship-grey sky and rain lashed the faces of both horses and riders. For a few, the day would end in glory but many would know no victory or hear no praise.

It was 1851and on an unseasonably chilly and damp day in late August the Cowbridge Hunt Steeplechase in the Vale of Glamorgan drew to a close with the victorious horse, enveloped in a cloud of steam, being paraded around the winner’s paddock.

And a handsome stallion it was; fifteen hands, chestnut with black stockings and at only five years of age offered a promising future of sport and leisure to any discerning buyer. One such buyer was indeed present on a day that was to prove auspicious for both horse and the family of the new owner.

Sir Charles Morgan Robinson Morgan, Lord Lieutenant of Brecon and Member of Parliament for Breconshire was a keen country sportsman with an eye for a good horse. Sir Charles promptly bought the winner and two years later there is a record of the horse, now named ‘Briggs’, competing in the Tredegar Park Races which were a Christmas tradition at the family’s estate in Newport.

Teachers in Wales call off next week’s planned strike action

But war clouds were gathering as the powers of Europe sought control over the territories of the declining Ottoman Empire. The third of Sir Charles’ eleven children, The Honourable Godfrey Morgan, joined the 17th Lancers in 1853 at the age of twenty-two. Shortly afterwards he embarked for Crimea taking as one of his four mounts the speedy and versatile ‘Sir’ Briggs. There is a suggestion that Godfrey ‘knighted’ his horse for services rendered in conflict but tales handed down from the Estate suggests this ‘title’ had been bestowed long before embarkation to the battlefields.

The journey to Crimea, on the sailing ship Edmundsbury, was a nightmare for the horses, by the time the vessel reached Constantinople twenty-six of the forty animals on board had died including three out of the four of Godfrey’s mounts. Only Sir Briggs was left.

Initially, the cavalry remained inactive, their commanding officer, Lord Cardigan unwilling to commit his mounted troops prematurely but on the morning of October 25th 1854 his moment came. The Russians had captured a number of Turkish guns and it was feared they would be turned on the Allies. Cardigan received the famous order from his commander in Chief: ‘Lord Raglan wishes the cavalry to advance rapidly to the front and try to prevent the enemy carrying away the guns.’

Six hundred and seventy-three horses and riders of the Light Brigade advanced at a trot into the wide valley, among them, Godfrey and Sir Briggs. Within minutes they came under fire from Russian cannon and rifle. Riders and horses began to fall. The paces was increased to a full gallop and with Russian guns on both sides of the valley and in front blasting away the charge thundered the mile and a quarter to the enemy positions.

Within minutes of the start of the action four hundred and seventy five of the horses were dead and a further forty-two injured including Sir Briggs who in conflicting accounts sustained either a sabre cut to the face or a shrapnel injury to the ear. But his prowess as a champion steeplechaser was never more valued as he called on every sinew and muscle and all his natural agility to deliver himself and his rider safely past the gun positions.

There was to be little rest, the Battle of Inkerman followed and by this time horses and riders were showing the effects of exhaustion. Godfrey became sick and was returned to Constantinople but there was to be no such rest for Sir Briggs who passed to Godfrey’s brother Freddie Morgan to be employed as his staff horse.

Following the fall of Sebastopol Freddie and Sir Briggs entered and won the Military Steeplechase before leaving Crimea and returning home. Finally, against all the odds the gallant horse was back in Britain, destined to spend the next twenty years in honourable retirement on the Morgan Estate.

Having shared such adventures and grave danger it is no surprise that Godfrey and Sir Briggs remained inseparable. Godfrey’s career was to take him to Parliament as Member for Brecon. On the death of his father he was raised to the peerage in 1875 and made a Viscount in 1905.

His philanthropy was legendary; he frequently reduced or waived rents on his tenancies in times of hardship and was an avid supporter of women’s suffrage. He is remembered fondly in South East Wales as ‘Godfrey the Good.’ But it was his attachment to his beloved Sir Briggs that inspired the most poignant of his legacies.

In the grounds of Tredegar House stands the memorial over the grave of the grand old horse. The inscription reads, ‘In Memory of Sir Briggs - A favourite charger, he carried his master, Godfrey Morgan, Captain 17th Lancers, boldly and well at the battle of the Alma, in the first line in the Light Cavalry Charge of Balaclava and at the Battle of Inkerman in 1854. He died at Tredegar Park, February, in 1874 aged 28 years.’

The monument serves to highlight the tremendous price paid by the animal kingdom in humanity’s wars and the selfless devotion they continue to show to those in whom they invest their love and trust.