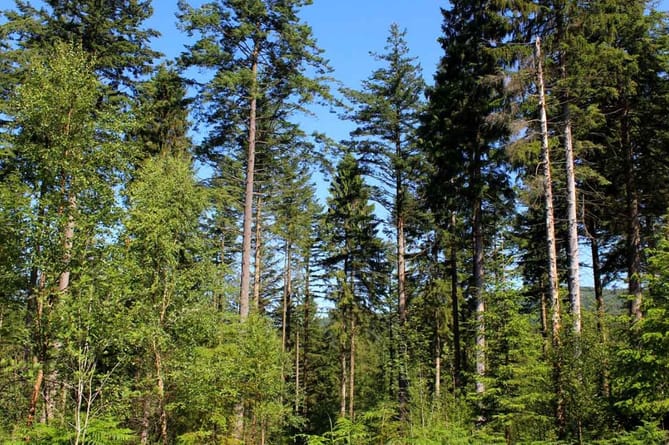 People have been ordered not to remove pine tree timber, seeds and foliage from woodland in Monmouthshire and across South-East Wales owing to an outbreak of a deadly tree disease.

A restriction on all timber movement has also been extended to the western Forest of Dean, bordering the Wye from Redbrook to Chepstow, and including Symonds Yat East, and the Biblings on both sides of the river, stretching up to the Doward Iron Age hill fort near Ganarew.

Outbreaks of the phytophthora pluvialis fungus have been spotted in Monmouthshire, Blaenau Gwent and Torfaen, although the exact locations are not known.

While the disease hasn’t been detected in the Forest of Dean, a ‘Demarcated Area Notice’ has now been introduced there to try and counter its spread.

Most expensive, busiest and trendiest parts of Monmouthshire to buy a house revealed

Census 2021: How do official population figures compare to estimates?

In Wales, the notice covers the whole of Monmouthshire and the Black Mountains as far north as Hay-on-Wye, stretching west to Neath and as far south as Caerphilly and Bridgend.

It restricts the felling and movement of wood, bark, fruit, seeds, leaves or foliage from pine trees, hemlocks, Douglas firs and tanoaks.

In the western Forest of Dean, the order restricts the movement of any wood, isolated bark and trees, including live, felled or fallen trees, fruit, seeds, leaves or foliage from within the restricted zone.

It was originally reported in Oregon, USA in 2013 on tanoak and Douglas fir and was subsequently identified as the pathogen responsible for ’red needle cast’ of radiata pine in New Zealand.

It was discovered in a woodland in Cornwall in September 2021, where it was found to be affecting mature western hemlock and Douglas fir trees.

There have also been outbreaks in Scotland, Devon, Cumbria and Surrey.

Tom Brockington, Operations Manager for Forestry England in the Forest of Dean, said of the restriction there: “Whilst we do not have a confirmed case of Pluvialis, the news that a case has been confirmed nearby and has resulted in the demarcated area notice being issued is of concern.

“There are now a number of confirmed cases in the UK and, Forestry England have been working with Defra colleagues and the UK plant health team in finding out more about this pathogen and what protection measures can be taken.

“We will continue to work with our colleagues and act upon the advice received.

“We are asking the community to adhere to the legal requirement by not removing brushwood from the woodland that has been issued this notice.

“We have contacted all our brushwood permit holders to advise them.

“Our timber operations require extra measures to comply with the notice and this may result in timber being stacked at the roadside for longer periods of time.”

Walkers and cyclists have been urged to brush off all mud and dirt from boots, buggies and bike wheels before leaving woodland areas.