MP presents plan for cleaning up the Wye 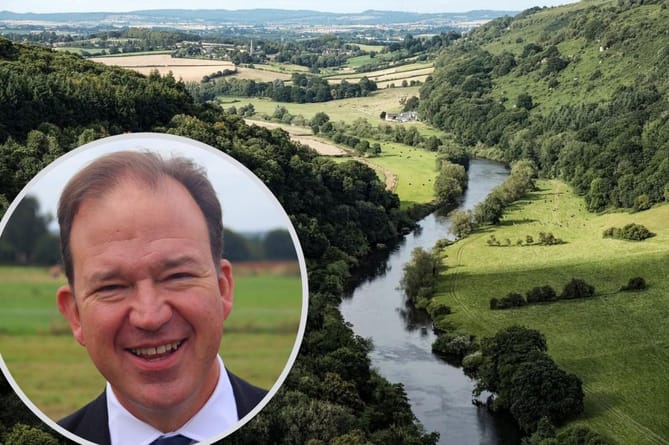 Prime Minister Boris Johnson conducts a ministerail reshuffle (© MoD/Crown Copyright. The material may be used for current news purposes only. It may not be used, reproduced or transmitted )

A WYE Valley MP has spoken out in Parliament and a national newspaper about the state of the River Wye and what needs to be done.

Jesse Norman said after leading a debate in the Commons on Thursday: “I was very glad to be able to make some key points about the River Wye in our Ofwat water debate. It was notable how widely these were supported across the house.”

But the politician, whose South Herefordshire constitency includes Welsh Newton, Llangrove, Symonds Yat West and Ross-on-Wye, came under fire after slamming “bureaucratic delays and inertia” for failing to tackle Wye pollution in an article in The Times the same day.

Dave Throup, the former Herefordshire and Worcestershire Environment Agency chief, who has clashed before with Mr Norman over the Wye, took issue with his article, tweeting: “Existing legislation is wholly inadequate to deal with the impending death of the Wye.

MP is ‘proud to stand with Ukraine’ after ban by Russia

“Leadership needs to come from Government but as we’ve seen recently they’re not very good at it. So keep trying to throw everyone else under the bus.”

In an article in The Times, Mr Norman said the Wye was at grievous risk” from phosphate pollution from farm soils, “exacerbated by the rapid development of chicken sheds”.

He called for more ambition in reducing phosphate levels, as well as bringing the long stop date forward from the current date of 2037 by at least five years.

He also proposed a ring-fenced national rivers recovery fund, paid for by fines on polluters large and small, as currently only small fines get put back into river restoration.

He wrote: “Much recent public attention has focused on the effect of sewage discharges, but the much bigger issue is the leaching of phosphate and other chemicals that have built up in the soil over many years of intensive agriculture on both sides of the border.

“Chicken litter is a particularly potent source of phosphate, and discharges upstream are naturally carried all the way down the river.

He added: “Three agencies are crucial to the clean-up: the Environment Agency, Natural England and Natural Resources Wales. All are needed, together with Ofwat, which regulates the water companies, and with guiding support from the Welsh and UK governments.”

Mr Norman has previously claimed the agencies have made an ’inadequate’ response to tackling phosphate pollution in the Wye.

Addressing the Commons on Thursday, he said: “Sewage discharges, at least in the River Wye… are only 25% of the problem. Phosphate leaching from fields is more like 65%.”

And he added that there was “a case for a wider national recovery fund for rivers” using fines paid by large polluters, and called for “an all-river strategy with some commissioners”, similar to regulation on the River Tweed, which has been recognised in law since 1807.

The Environment Agency (EA), Natural England (NE) and Natural Resources Wales (NRW), along with the two governments and water companies regulator Ofwat, must “develop a single team and a joint long-term cross-agency strategy covering the river from source to mouth”, he added in The Times article the same day.

But Mr Throup hit back in a social media spat with the hereford and south Herefordshire MP, saying: “There is a plan, drawn up by all the agencies you mention and many more. It’s of little use as it has no funding or backing legislation.”