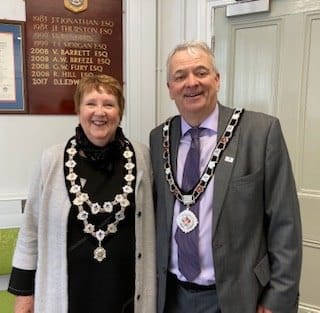 It has been an honour and a privilege to serve as the Mayor of Abergavenny 2021/2022, writes Cllr Tudor Thomas.

The year has just flown. My wife Jan and I have enjoyed it all. There have been so many people we have met and had such an insight into all of the organisations that operate within the town and the great work that so many people do.

The period running up to Christmas 2021 was particularly difficult when the Omicron version of Covid started spreading at an alarming rate as many of the anticipated events had to be cancelled.

I have had superb support from the Town Clerk and her assistant, the Town Team and the staff at the Hub. I was thrilled by the wide range of shops and businesses who generously donated prizes for my charity raffle which raised over £1400 for my three charities - Cyffanol, the Women’s Aid charity, the King Henry VIII Hardship Fund to assist families who are struggling to pay for those ‘extras’ for their children and Abergavenny Food bank. I was able to present them each with £1245 a few days before my term of office ended which was a great way to end.

My wife and I have enjoyed working with the Syrian community who have settled in Abergavenny which is designated a Town of Sanctuary. Abergavenny Town Council has been committed to helping refugees from any country to settle in our town.

So many events were memorable during the year but I cannot forget laying the wreath on behalf of the Town Council in November and my Civic Service where I was able to share this service with so many people and organisations from the Town as well as family and friends.It was a great pleasure to open the new Youth Service building on the Old Hereford Road just before the election. Abergavenny Town Council jointly funded this with Monmouthshire County Council. Resources for young people are vitally important and I hope the young people of this town will enjoy the opportunities it gives them for many years to come.

I was humbled and moved to represent the people of Abergavenny when I was invited to speak at the rally in support of Ukraine in March at St John’s Square by families in Abergavenny who had relatives in this war torn country. One woman’s cousin had written an incredibly moving email to her relative in Abergavenny which was so thoughtful and gave such an insight into the suffering she and her fellow Ukrainians were facing. It moved my wife and I to tears when we read it beforehand and visibly moved everyone who attended the rally. We really hope the conflict will end and this country can start to return to normality.

I handed my chain over to the new Mayor Cllr Anthony Konieczny on May 12 at the AGM of the Council.

I wish him, his wife Sue and the new Town Council well in the coming year and I also send my best wishes to everyone in Abergavenny. We are all so lucky to live in this wonderful town.