Nominations are coming in for your local community heroes 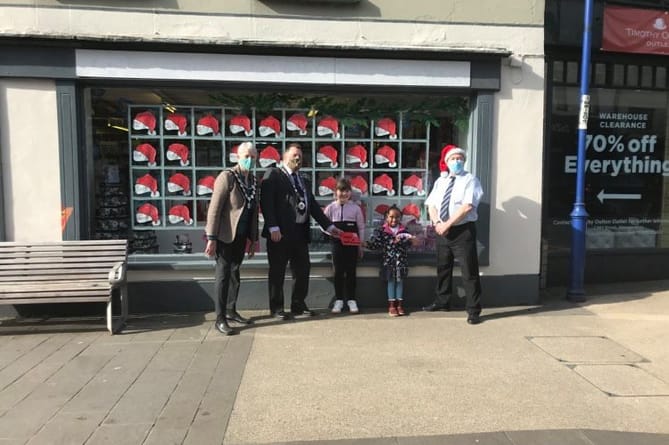 Councillor Tony Konieczny, when he was mayor during the Covid lockdown, second left, with Paul Cable far right , pictured outside his newsagents shop making a presentation to local children (Pic from Paul Cable )

Nominations are coming in for your local heroes right here in Abergavenny.

We have several contenders who have been put forward for the different categories for our Community in Kindness awards.

Over the coming weeks we’ll outline their stories and the reasons why they have been nominated.

One of our first nominations is popular newsagent Paul Cable whose shop is in Frogmore Street.

He is known for his artwork on the wall opposite his shop of Dame Vera Lynn and Sir Tom who raised millions of pounds for the NHS.

Paul has also used his shop window to highlight many local causes and has also raised money for individuals.

Paul has been nominated for ‘Heart of the Community award and his nominee says: ‘‘Paul is a most talented artist who is at the very heart of our town.

‘His cheerful personality and enthusiasm in supporting both individuals here in the UK and abroad is a constant source of inspiration.

‘‘A recent example is his artistic window for the people of the Ukraine.

‘‘In the past Paul has supported our NHS during Covid and our military and private heroes.

‘‘His artistic work enhanced our town at every opportunity. Paul works extremely hard at his own business and for our community.

‘‘I have no hesitation in recognising his contribution in enhancing Abergavenny.

‘‘This is an award long overdue to this most loyal citizen.”

Another person who is welll known in the town is Councillor Tony Konieczny who has recently been re-elected as the town’s first citizen.

Tony’s nominee says:: ‘‘As town mayor during two difficult Covid years Tony did much to keep our community functioning and in touch.

‘‘He was the main force behind the town’s success in the Abergavenny in Bloom competition .

‘‘Tony and friends also provide excellent entertainment in the Jivaholic and Hadrow Collider bands including raising more than £1,000 for Ukraine recently.’’

Tony has been nominated for the ‘Heart of the Community’ category.

Helen Davies of Abergavenny has been nominated for the Volunteer of the Year category.

Helen’s nominee says: ‘‘Helen gathered together a team of like-minded volunteers to collect litter from The Meadows and the town.

‘‘She has inspired and encouraged these volunteers to make our town a place to be proud of and for others to admire.’’

We have 11 amazing categories for the awards, which will highlight all individuals from our community who are true champions.

It is really easy to nominate someone.

Or if you would prefer, simply fill in the nomination coupon on page 11 or complete one of our flyers which have been distributed throughout town.

Once you have filled the form in just return them to our Nevill Street offices and place into our nomination box or if closed put throught the letterbox.

You’ll also find a nomination box one at the library entrance.

Those nominated for the awards will be invited to attend a celebration afternoon tea at the Angel Hotel in Abergavenny in July. Closing date for nominations is June 24 2022.