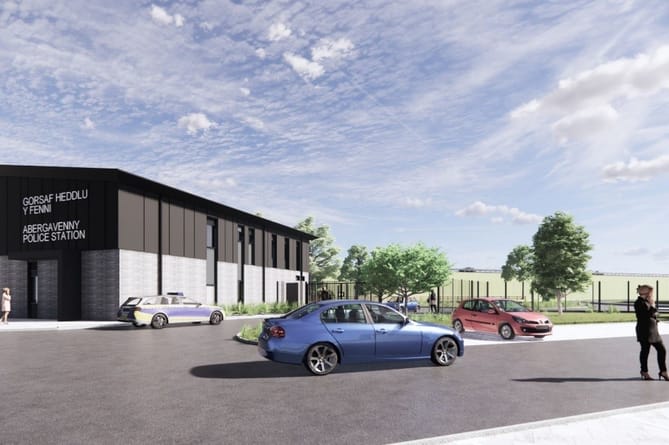 A replacement police station for Abergavenny will be sited on the edge of town beside the Heads of the Valleys A465 dual carriageway, but won’t be freely open to the general public.

Design Commission for Wales consultants have noted the proposed building’s “aggressive” architectural design, which has been designed to appear as a warehouse or office facility, not as a ‘welcoming’ civic building.

But the Police and Crime Commissioner’s Office for Gwent say it will provide “a strong visual presence (that) will give a positive message to the community that a strong police presence is located in this area”.

And it adds: “The building has been designed and positioned to act as a deterrent to persons utilising the Heads of the Valley road for criminal activities.”

People wanting to talk to police will still be able to do so at the current town centre drop-in centre at the Town Hall, but the only way to contact police at the new station will be via intercom.

If Monmouthshire Council planners give the go ahead, the new station will be sited on a brownfield site close to McDonald’s in Llanfoist, and will provide an operational centre for Gwent Police’s Abergavenny neighbourhood policing and response team.

It will replace the town’s more traditional police staion on Tudor Street, which closed in 2019 to make way for retirement apartments.

But a report submitted on behalf of the new scheme says members of the public will only be able to access the new building “by invitation” owing to “security protocols”.

Community engagement during the design phase of the project has also been “kept to a minimum… for the safety of staff and property”.

“The building’s primary function is an office facility for the police, it is not a community hub nor is it a civic building where members of the public can access freely,” adds the report.

“A public-facing police presence remains in the town centre… a walk-in centre is currently in operation.

“The approach here is a hybrid approach with two key objectives; the need for a community, public-facing facility within the town centre, but also a public-facing building, located on one of the key highway networks into South Wales to act as a visual deterrent to criminals.

“The site’s location, with immediate access onto the strategic highway network was seen as major opportunity of this site.”

A 2.1m high secure fence will surround the proposed 410m sq station, on land between Llanfoist highways depot and Llanfoist Farm, east of the B4246 and south of the A465.

While the building has been designed to “stand tall and loud”, the surrounding environment will have “a softer feel”, including 18 new trees, grassed areas, wildflower planting and an enhanced lagoon, which will be off limits to the public, but will be visible to passers-by.

Under the plans, the two-storey station will include welfare facilities such as a gym on the ground floor, and office and meeting rooms on the first floor.

There will be a room for the public to attend voluntary informal interviews, but no custody suites.

A planning statement says emergency ‘blue light’ vehicles will operate from the station, but an exclusion zone around the site means the use of sirens will be minimised to reduce the impact on residents living in the area.