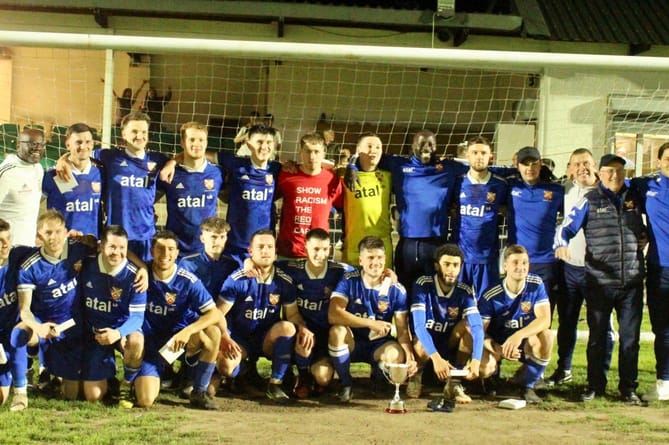 The best night in Abergavenny Town FC’s eight-year history saw the club crowned league champions on Friday to secure promotion to the second tier – the highest standard they have ever reached.

Victory by a single Joseph Ogugua second half goal over fourth-placed Trethomas Bluebirds means that both the town’s men’s and women’s teams are now league champions.

There was lots of expectation but plenty of tension as the Ardal South East title race went down to the wire under the floodlights at Pen Y Pound in front of a big crowd.

Abertillery Bluebirds’ 3-1 midweek win over Monmouth Town in their last fixture saw them go a point above Sean Wharton’s Pennies, who then needed a draw or a win to take the title.

Walker, 84, to take on one last challenge for charity

Cause of major town fire is unknown say investigators

Trethomas travelled with confidence having dispatched Goytre FC 4-1 at home on Tuesday, and were targeting a third-placed finish.

And the nerves played a part in a cagey first half, with Aber just needing a draw on account of having a better goal difference.

But six minutes into the second half, Ogugua rose to head in from Dan MacDonald’s corner to make it 1-0.

There was a worrying last 10 minutes when Rhys Tandy received a second yellow to reduce the Pennies to 10 men.

But with the fans urging them on and the clock ticking down, they saw out time to clinch the title by two points.

On top of that, a ground inspection by the FAW earlier in the day had granted a Tier Two Licence to the club, meaning promotion is guaranteed to the Cymru South League.

Formed out of Govilon Fc in 2014 after the demise of Abergavenny Thursdays, they amazingly lost their first three games of the season and were rock bottom.

But they picked up to steadily climb the table and overhaul the early pacesetters, winning 21 and drawing three out of 30 matches.

The town last had a second-tier side in the men’s pyramid back in 1998 after one solitary season in the inaugural League of Wales.

And the success matches Abergavenny Women FC who won the Adran North title last month to secure promotion to the Adran Premier, with Town’s Youth team and Mardy FC also enjoying league and cup success.Abergavenny Town FC posted: “What a season, from an inconsistent start, who would have thought we would end up being league champions and gaining promotion!!

“A massive thank you to all the support shown throughout the season and an incredible turn out last night.”

Abergavenny finished on 66 points, with Dan Macdonald scoring 33 of their 66 goals.

Abertillery Bluebirds were second on 64, Caldicot Town third on 62, Trethomas fourth on 59, Goytre fifth on 57 and Monmouth sixth on 47.

Mid-season leaders Goytre would have been in the mix, but their title charge was derailed when they were docked points in January for fielding an ‘ineligible’ youth player on the bench.

They finished off with a 4-2 win on Saturday (May 7) at Aberbargoed Buds, Chris Ham scoring all four and securing the golden boot as league top scorer ahead of Macdonald, firing 39 goals in total to help the Penperlleni outfit finish highest scorers with 105 goals.

Runners-up Abertillery Bluebirds will now contest the play-offs against the South West runner-up, currently Pontyclun, for the other promotion spot.

Abertillery’s other team Excelsiors finish bottom on 17 points, with Panteg second to bottom on 19 points.