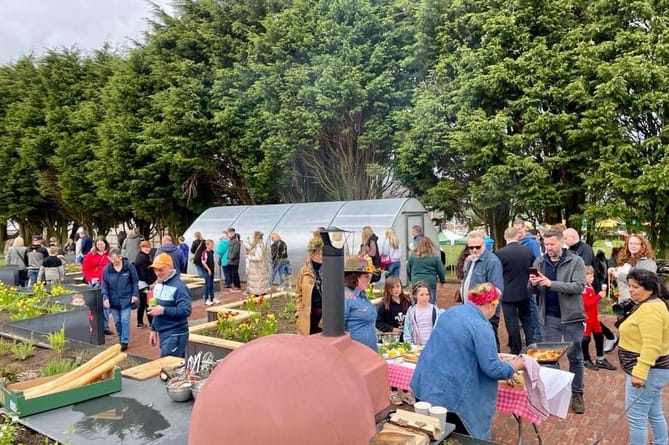 The community garden in Blaenavon (Pic from Forgeside RFC )

A rugby club which adopted a patch of rubbish-strewn wasteland beside its ground has celebrated its transformation into a community garden with a starring role on national TV.

Forgeside RFC revealed last week it had scooped the Wales award in the Royal Horticultural Society Garden Day competition for the makeover of the site.

They appeared with One Show presenter Alex Jones on a windy hillside to announce the honour, and were then visited by Radio 2 presenter Richie Anderson and the BBC 1 show’s film crew for the official launch and open day on Bank Holiday Monday, alongside BBC Big Cook-Out duo Sam Evans and Shauna Guinn who provided food cooked on the new BBQ.

The garden was opened by Torfaen MP Nick Thomas-Symonds, while garden designer Victoria Wade was lifted into the air holding a ball line-out rugby style by the team’s players to celebrate.

Hundreds attended the day and Sam and Shauna tweeted: “What a day! Cooking up a storm for 100O volunteers with Richie Anderson.”

The local MP said it was a “privilege” to help launch the garden, and added: “Thank you to everyone who’s worked so hard to make this great community project a reality. It will be such an asset in the years ahead.”

Announcing the award, which includes £15,000 investment over the next three years, an RHS spokesperson said: “Forgeside RFC Sports and Social Club applied for the garden to benefit everyone who lives in the old mining town by providing them with a vibrant community hub, an outdoor classroom and a public food-growing space.

“The design of the garden, created by Swansea-based Victoria Wade Landscape Architecture, is inspired by the heritage of Blaenavon which was the centre of the Industrial Revolution in the 19th century.

“Rusty, steel planters with fiery red, yellow and orange flowers such as dahlias, helenium and sunflowers will be reminiscent of the furnaces of nearby iron works that were fuelled by coal sourced from local mines like ‘Big Pit’.”

Victoria Wade said: “We had the most amazing day celebrating the launch of our community garden at Forgeside RFC in Blaenavon on RHS Garden Day.

“The whole community turned out to celebrate, the wonderful Sam and Shauna from Hang Fire BBQ fired up the pizza oven and the lovely Richie Anderson from the One Show interviewed us live on the show before we were serenaded by a wonderful male voice choir!

“This has been an absolute dream project to work on and we have loved every minute!! Thanks so much to the wonderful NP Garden and Landscaping Ltd team for working so unbelievably hard and making it happen in the crazy timescales, we couldn’t have done it without you, and to the fab Printmet Limited for pulling out all the stops to make my vision of a rusty steel garden a reality.

“I can’t wait to see the planters weather in, and now knowing Blaenavon I think I’ll be a matter of weeks not months until it is all rusted up nicely!”

“We’ve felt so cut off over the last few years from the outside world as well as each other and this garden will become the beating heart of the community.

“Being an old mining village we don’t have gardens at home or a community space where we can all get together.

“There is a big reliance on foodbanks but now that we can grow fresh food for everyone – we couldn’t be more grateful.

“The garden really will transform daily life so the news has lifted the whole town, you only have to walk down the street now to see the big smiles on people’s faces.”

Blaenavon joins Huntingdon in England, Paisley in Scotland and Randalstown in Northern Ireland as a national winner.

The community will be able to grow flowers, fruit and vegetables at the 300m sq garden, which will include a greenhouse, seating areas, a pizza oven and a dining space, and which can be used by school children and youth group members as a learning space.

Pollinator-friendly plants capable of withstanding the area’s high winds, rainfall and frosts will also help boost wildlife. To catch the garden’s big launch on the One Show go to www.bbc.co.uk/iplayer/episode/m001716s