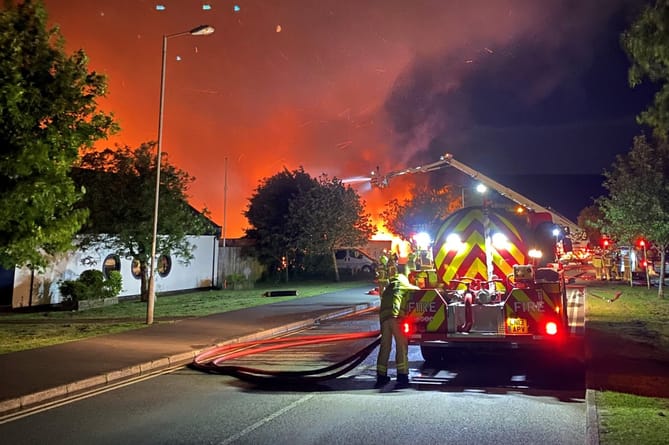 A man was rescued from a burning building as more than 100 firefighters fought a large commercial fire on a Blaenavon industrial estate overnight on Wednesday and Thursday (June 8-9).

The fire broke out at a caravan repair centre on the Gilchrist Thomas Industrial Estate around 10.45pm on Wednesday night (June 8).

Some 40 crews were involved in bringing the fire under control, which gutted one building and destroyed caravans and vehicles.

Residents were warned to stay indoors as plumes of smoke rose from the estate, while 21 neighbouring properties were left without power.

A South Wales Fire and Rescue spokesperson said: “Upon arrival, crews were faced with a large, well-developed fire affecting a large building, approximately 80mx30m and several caravans and vehicles.

“The building and a large number of caravans and vehicles have been completely destroyed by fire.

“One person was rescued from the premises and all other persons have been accounted for.

“Crews used specialist equipment, including a ground monitor, hose reel jets, aerial ladder platforms and water bowsers, to strategically manage the fire and prevent it from spreading to nearby buildings.

“Members of the public were advised to avoid the area to allow for emergency service access.

“Local residents were also advised to keep their windows and doors closed due to the high levels of smoke in the area. These measures have now been lifted.”

Fire crews spent much of Thursday morning damping the blaze down, although road closures were lifted by lunchtime.

The spokesperson added on Thursday afternoon: “Crews will remain at the scene to dampen down and carry out investigations with partner agencies.”

South Wales Fire and Rescue, Head of Risk Reduction Jason Evans, said: “We would like to thank the public for their cooperation during this complex and arduous incident.

“Officers will remain at the scene for a number of hours to carry out investigations and we’d like to remind the public to proceed with caution in and around the area.

“Our crews worked tirelessly to secure the area and worked with partner agencies to bring the incident to a safe conclusion.”