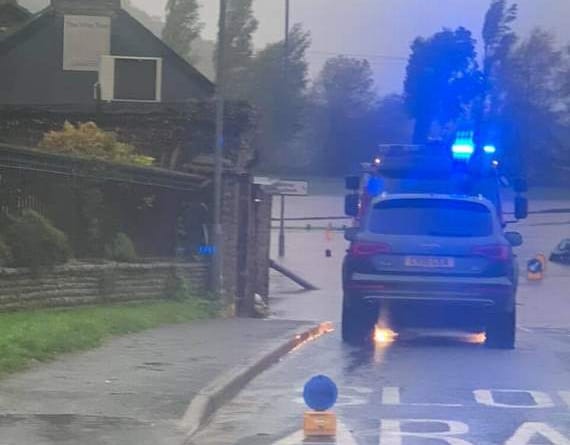 Flooding at Crickhowell near the Vine Tree restaurant

Update 4pmPolice in Abergavenny have issued a warning after reports of youngsters swimming in the flooded River Usk at Castle Meadows. Police have warned that this is dangerous not only because of the strong currents but as a result of disease/infections which may be carried in the water. “Please stay out of the water. The current is strong and the high water is possibly affecting the bridge,” police warned via social media. As the flooding continues and emergency services work to control the situation one local business in Crickhowell rallied around to help neighbours affected by rising water levels. Independent bookshop Bookish offered residents of Bridge Street and New Road affected by the flooding who needed somewhere ‘warm and dry’ the chance to call in for a free hot drink and piece of cake. It has also been announced that the A465 between Gilwern and Brynmawr has been reopened in response to the flooding and the remainder of the planned weekend closure cancelled. , 11am - updateA spokesman for Costain has said that the company is trying to reach-open the A465 ahead of schedule in light of the extensive flooding on the local diversions. “Following the flooding of the official diversion route we are endeavouring to reopen the A465 between Brynmawr and Gilwern as soon as its safe to do so,” he ROADS around Abergavenny and Crickhowell are closed this morning as the area continues to feel the brunt of Storm Callum.

On Saturday morning the River Uak at Llanfoist had broken its banks, causing extensive flooding while both the A4042 between Abergavenny and Little Mill from the Hardwick Roundabout and the A40 Crickhowell Road were closed as a result of flooding, Castle Meadows and much of Merthyr Road were also under waterWith roads into Crickhowell impassible the town was being described as being like an island and emergency services were urging residents to avoid travel unless essential.

A spokesman for MCC said, “Six members of staff have been dealing with incidents on an on-call basis.

We’ve dealt with a numerous minor incidents, including a lot of branches falling, some fallen trees, and standing water which has been cleared by staff. “