‘Heads would roll’ claims vicar in bishop fall out 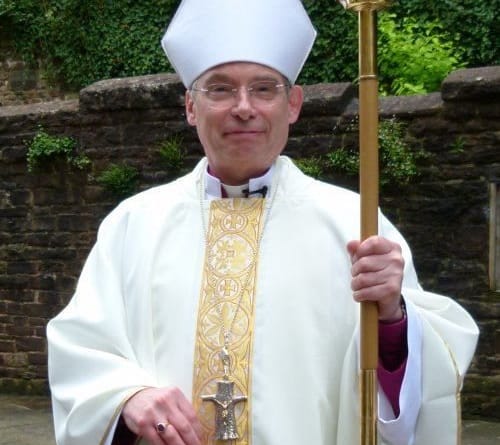 No less than 15 vicars resigned or retired from the Monmouth diocese following a hard-hitting independent report into the long absence and subsequent retirement of former bishop Rt Revd Richard Pain.

The controversial handling of the former Bishop of Monmouth’s nine-month absence and subsequent exit would probably have seen people sacked in any other walk of life, the Church in Wales governing body was told.

Diocesan vicar Rev Richard Mulcahy criticised the lack of “proper discussion” of a damaging independent report into the “disastrous” affair at a meeting last week.

And he told church leaders that in any other organisation it “would probably have seen heads roll”.

“We’ve recognised that what happened was very much disastrous to the diocese and to individuals involved, and [has led to] a lack of trust in general…” he added.

“It’s not so much an own goal as giving your pitch away to someone else. It was dreadful.”

The fall out from the handling of the bishop’s absence and April 2019 exit has rocked the diocese.

The current Bishop of Monmouth, Rt Rev Cherry Vann, admitted at the meeting that the “uncertainty” had left it “in limbo” for some time, with “long vacancies, unease and resentment, and a decline in spirit and morale”.

But the bishop added that the diocese was “a very, very different place from the one I came to two years ago. We have moved on from what was a most difficult time of turmoil and distress.”

The publication of the report, overseen by former Bishop of Norwich Graham James, made 28 recommendations for change, with Archbishop of Wales, Most Rev Andrew John, subsequently apologising over the “ruinous” fall-out from the handling of the former bishop’s absence and retirement, saying “numerous people’ were left “vulnerable and damaged”.

Matters leading up to the former bishop’s resignation included inquiries and a long and failed process of mediation while he voluntarily stepped back from duties.

A “misleading and damaging” press statement also fuelled unfounded rumours of a bid to oust Rt Rev Pain, the former vicar of Monmouth, who was encouraged to return to his ministry by clerics who launched ’Operation Lovebomb’, messaging churchgoers to send him their support.

The report exonerated current Archdeacon of Newport, Jonathan Williams, the former Dean, Lister Tonge, and the former Archdeacon of Monmouth, Ambrose Mason, of any blame, revealing that concerns for his health and wellbeing had been made, but there was no formal complaint.

In a joint statement in response to the review’s findings, the trio said they would live with “deep scars” from the “traumatic events”.

The report wasn’t debated at last week’s governing body meeting, but the Church Times reported that it had approved a Standing Committee report to set up a group to implement the 28 recommendations, which will include Rt Revd Tim Thornton, a former Bishop at Lambeth and Bishop of Truro.

The report panel said: “We believe a sea-change in attitudes is needed so that dignity at work and maintaining appropriate boundaries are seen only in positive ways.”

It claimed the then Archbishop of Wales, Rt Rev John Davies, had failed to deal with the matter effectively, as rumours of a falling out among top diocesan members made headlines.

And it recommended a full review of the role and powers of the Archbishop of Wales in the constitution, and “a process enabling whoever is appointed Archbishop of Wales to engage in transition to their new role with appropriate and sufficiently senior staffing to support them, so that those in other important senior posts do not have tasks devolving inappropriately upon them in times of difficulty or crisis”.

The current Archbishop told last week’s meeting that work to date implementing the recommendations had “ensured we were not marking our own homework”.

Rt Rev Vann revealed that full parish structures would be replaced by ministry areas from next January, and there was a growing feeling of a shared sense of purpose in the diocese.

Five short films from the diocese on subjects such as equality and diversity, social justice, and stewardship were shown to the meeting, which highlighted its grass roots work, including a clothes bank.

“It is too easy to find ourselves working in silos,” Bishop Vann said. “It is through the ministry of local people, supported by the diocese, that people are drawn to faith.”