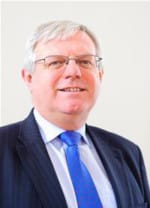 A COMMUNITY councillor who described homosexuality as a "sickening and depraved practice" will face no further action, a tribunal has ruled.

Graham Down, who also said he "would not promote the hideous perversions", was alleged to have breached Mathern Community Council’s code of conduct.

Some of Councillor Down’s comments came at a public hearing minutes after he was suspended for previous homophobic comments made while serving on Monmouthshire County Council.

But the case pursued by the Public Services Ombudsman for Wales was dismissed after being described as legally "misleading".

Glider crashes after pilot, 84 flies away from Usk airstrip

Councillor Down says he regrets his conduct at the hearing, but did not apologise for the offensive language he used.

In these e-mails, sent in 2016, Councillor Down criticised the council flying a rainbow flag - a symbol of LGBT rights - at County Hall, saying homosexuality was an ’immoral perversion to be condemned, not promoted’.

The Adjudication Panel for Wales (APW) unanimously agreed that the comments were homophobic and in breach of the code of conduct.

Following the announcement at Cwmbran Magistrates’ Court, Councillor Down said, "I cannot be part of a system where I am required to suppress my conscience.

"I will not do so, nor will I stand up for, defend or promote the hideous and sickening perversions."

Under the Local Government Act, the ombudsman can investigate cases in which a written allegation is made, or other cases which have come about as a result of said investigations.

Councillor Down’s comments were referred to the APW as a fresh breach of the code of conduct and a second hearing took place in March 2019.

It was claimed that the second alleged breach came as a result of the first investigation, but this was disputed by the APW and Councillor Down.

The APW’s decision report said:,"The case tribunal consider that to be a misleading and inaccurate statement of the law."

Councillor Down argued that his comments were made during a previous hearing which had concluded, adding that there was no written complaint to justify a new investigation.

He said, "The expression used was not a result of an investigation but a result of the decision of the Panel.

"It was made in a highly charged, emotional moment and whilst I do not retract the words used, I regret my conduct and apologise to the Panel for the outburst."

The APW said that by submitting the investigation in December 2017, the ombudsman accepted that it was complete - months before the hearing where Councillor Down made his remarks.

The report says, "The case tribunal does not accept that the second referral information has come to the attention of the ombudsman as a result of the first investigation. "The ombudsman is to investigate complaints from third parties, not to initiate the complaints or the investigation himself." As previously reported by this newspaper, In an email dated February 12 2016, Mr Down said, "I am, and have been, always quite open that I agree with the teachings of just about every major world religion in that homosexuality is an immoral perversion to be condemned, not promoted". The email continued, "Indeed as a matter of straightforward logic I do not understand why a homosexual act is apparently acceptable but not a paedophile act. Both are unnatural and I struggle to see a difference of substance." In a separate email on October 1, 2016, Mr Down said: "I believe homosexuality, transgenderism, etc are immoral perversions. I do not accept the activities as being ’normal’ in any way."