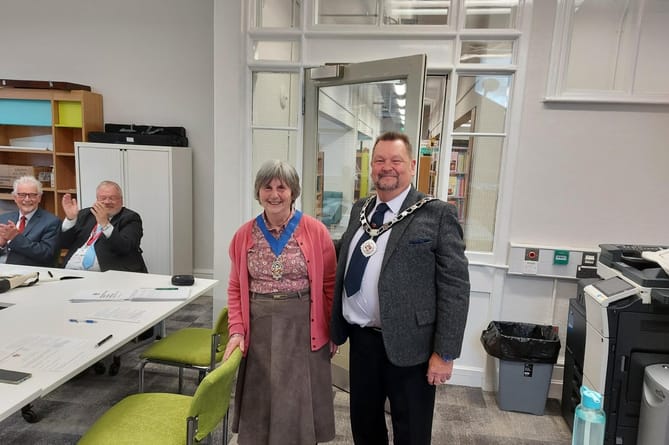 At their Annual General Meeting on Thursday May 12, Abergavenny Town Council elected Councillor Tony Konieczny as their new Mayor.

Councillor Konieczny is town councillor for Park Ward and received unanimous support from all councillors present at the meeting, and took up the position with immediate effect with his wife as Mayoress.

The new Mayor is of course no stranger to the role having previously acted as Mayor for two years from May 2019 to May 2021, a term that was dominated and often disrupted by the Covid pandemic.

Councillor Konieczny is also a governor for Abergavenny primary school Our Lady and St Michaels.

Councillor Konieczny was also reinstated as Chair of the Environment Committee, and will act as Council representation for Abergavenny in Bloom as well as the Planning Committee.

Following his election as Mayor, Councillor Tony Konieczny said: “It’s a great honour and a privilege to be elected to represent Abergavenny as Mayor, and I look forward to the coming year.

“There is a great deal of work to be done to ensure the prosperity continues for Abergavenny as we come out of the pandemic. If we face the challenges ahead of us together, the Town Council, County Council, the business community, and residents can continue to make Abergavenny a great place to live, work and visit.”

Reflecting the need for support within the community, local charities Cwtch Angels and 7corners have been nominated as the Mayor’s Charities this year.

Cwtch Angels works in the community providing support to young families with food, clothing and baby equipment and furniture.

7corners is a project funded by the Bridge to Cross Charitable Trust and is dedicated to offering hope and hospitality to all young people, with their centre in Seven Corners Lane in Abergavenny aimed at offering a place where young people can meet in safety and find help and support for their personal development.

Mindful that Abergavenny is also a Town of Sanctuary, Mayor Konieczny would also like to support Humanitarian Help for Kharkiv, a local support group providing support to the community of Kharkiv.

Councillor Wilde is a newly-elected town councillor for the Pen Y Fal Ward.

Deputy Mayor Wilde said: “I am looking forward to supporting the Civic role of the Mayor, particularly as one of 11 newly elected Town Councillors. By being part of Abergavenny Foodbank, as a trustee and volunteer, I want to build on the existing community spirit within Abergavenny, to bring fairness and equality to the town.”