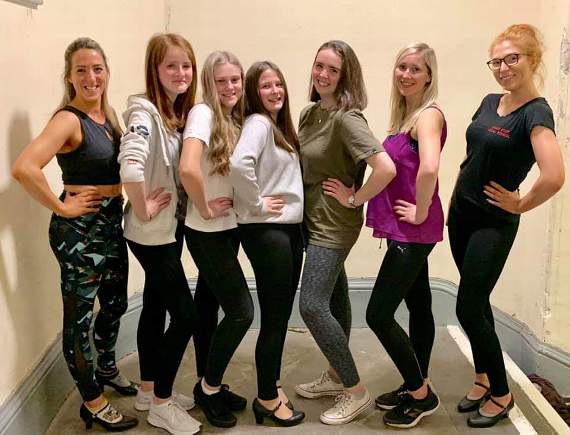 AFTER series of slightly more modern offerings in the past few years, AAODS return to more familiar ground with a 75th anniversary production of the Rogers and Hammerstein classic Oklahoma which opened at the Borough Theatre on Tuesday night.

The first musical penned by the groundbreaking team, Oklahoma is based on based on Lynn Riggs’ 1931 play, Green Grow the Lilacs and set in the American Indian Territory of 1906, telling the tale of territory lass Laurey Williams and her

For AAODS this was a refreshingly simple and pared down production, placing the orchestra on the stage and making full use of the auditorium to bring the action to the heart of the audience.

To get the criticism out of the way early in the day, there were times when the production lacked the polish which would have elevated it into a higher category. Some of the performances at times fell slightly flat, the diction was awful and while I loved having the terrific orchestra on stage, the coming and going through the auditorium could be distracting, but on the whole the young cast, many making their AAODS debuts, worked well Personally the odd anachronism also irritated - I’m pretty certain skinny jeans and crops tops weren’t the order of the day in 1900s Oklahoma and I may be wrong but it looked as if Ali Hakim - otherwise well played by Shane Bassett - was wearing a fitness tracker but of course it may well have been a Persian fertility bracelet to keep track of his exuberant farewells. All that said however on the whole I enjoyed this production more than I had anticipated.

The cast, headed by Lauren Barrett and Matt Bryant as Laurey and Curly worked well together, and it was nice to see Laurey given a bit of a modern twist and made slighly less wishy-washy than in previous incarnations.

There were times when Lauren’s sometimes withdrawn portrayal made you wonder if Laurey wasn’t a tad more manipulative than she’s normally given credit for and certainly capable of keeping Curly on his toes.

Chris Holt made a welcome AAODS return as a sinister Judd Fry, bringing a chill with his every appearance. As he and Curly swapped thinly veiled threats in an effective smokehouse scene, there was more than a touch of the serial killer about him, lightened only by an effective musical interlude.

Welcome comic relief came from Shauna Barnhouse as Ado Annie and John-Paul Price as Will Parker, who were both larger than life both dramatially and musically. As Aunt Ella, Deborah Harrington once again showed her comic mettle with some nice cameo appearances from Emily Harrington as Gertie Cummings, Ben Chester-Master as Andrew Carnes and Mike Davies as Cord Elam.

On the whole this was an enjoyable production of a true theatrical classic and it was disappointing to see the theatre barely half full for opening night.

If some of AAODS’ shows haven’t quite been for you in the last year or so, don’t miss out on this one - I’ll stick my neck out and say you won’t be disappointed. If you’re in the market for a bit of good old fashioned musical theatre, with lots of colour, excellent chorus work, memorable melodies and a hefty dose of laughter, then pick up a ticket for Oklahoma.

To borrow a phrase from Aunt Ella herself, it’s a production which if not better than any others, was ‘jist as good’.