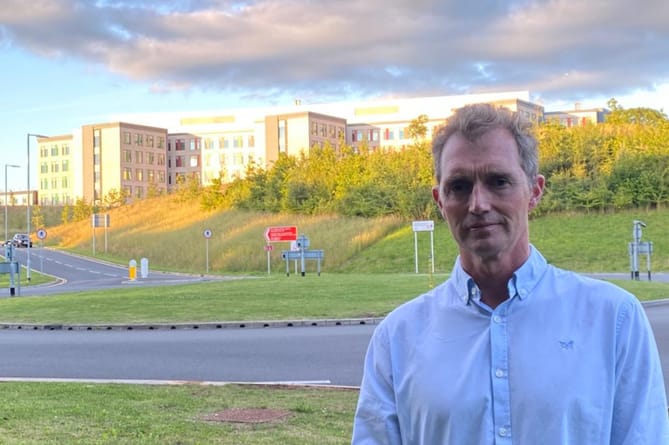 Monmouth MP David Davies has reiterated his call for the Welsh government to launch a public inquiry into the state of healthcare in Monmouthshire, as patient complaints about services at the new Grange Hospital mounts.

Mr Davies said there were mounting pressures on the NHS across Wales, although the problem seemed “particularly astute” in Gwent amidst concerns the £350m Grange Hospital at Llanfrechfa is not fit for purpose.

David Davies said: “I am accused of undermining doctors, nurses and paramedics every time I raise this issue.

“The blame certainly does not lie with them. We are being let down by those in charge.”

The Chronicle has since received a number of letters from people living near Abergavenny complaining about the service provided as healthcare patients and the travel time for those redirected from Nevill Hall to the new hospital in Llanfrechfa.

Aware of the concerns health bosses for the Aneurin Bevan Health Board last week highlighted an information campaign advising patients with life threatening conditions to go to the Grange and not Nevill Hall, after the emergency department at the Abergavenny hospital was replaced by a Minor Injuries Unit following the opening of the new hospital in Cwmbran in November 2020.

One local resident who complained about the service provided was 84-year-old Eve Criddle. Mrs Criddle was admitted to the Grange from her home in Clydach having fallen over and knocked her head.

On arriving at the Grange at around 7.30pm, she said she waited for several hours in a crowded emergency department and when finally seen was told she would have to wait a further few hours before she could be admitted for a brain scan. Having decided to leave and see her GP the next day, Mrs Criddle visited her GP who advised her to return to the Grange. Arriving at 3pm, she once again had to wait several hours before being seen at around 11.30pm by a doctor who was forced to leave on several occasions to deal with more critical cases.

Following examination, she was once again told she would have to wait several hours for a brain scan at which point she decided to go home.

Speaking at her home in Clydach, several weeks later Mrs Criddle was very complimentary of the hospital staff who she feels are being pushed to “breaking point” by health bosses.

She said the facilities at the hospital in Cwmbran were unfit for purpose with an overcrowded emergency department and limited parking facilities, describing the hospital as a “land-locked Titanic.”

Mrs Criddle decided to speak to the Chronicle in the hope of gaining further public support to launch a public inquiry into the healthcare failings.

The Chronicle has received further complaints this week with one Abergavenny resident speaking of a neighbour who required an ambulance, but was told it would take several hours to get there. After traveling to Nevill Hall they were told to travel to the Grange instead but after insisting someone from Nevill Hall check on their neighbour, their oxygen levels proved so low it would have been unsafe to move them and they were admitted to Nevill Hall where they stayed for several weeks.

And another letter from a mother told of how her disabled son was admitted to the Grange as an emergency, only for his mother to be told she was not allowed to stay with him.

The mother claims he should have been referred to the Disability Liason Team as soon as he was admitted but this was not done until day five, and that was only because his sister, an NHS worker in Worcester, got involved. She was very disappointed with the standard of medical care given to her son and also claims that staff morale at the hospital is at ‘rock bottom’.

David Davies has also had letters of complaints over the hospital.

He said: “Over the last few weeks my office has received numerous complaints regarding the level of service patients in the Monmouthshire area are receiving.

“When it was first proposed closing the Accident and Emergency Department at Nevill Hall in Abergavenny, both myself and residents were assured the extra time it would take for patients travelling the longer distance to Cwmbran, would be compensated by the service provided at the Grange, but as we have seen with these letters and complaints sadly that has not always been the case.

“As I have said before I would like official answers for my constituents to the levels of service and care given at the Grange, and have contacted the Welsh government with regards to launching a public inquiry into the healthcare service in Monmouthshire. Despite receiving no confirmation so far of an inquiry being launched I will continue to push for this action and hope that will now change with more patients coming forward with their stories.”