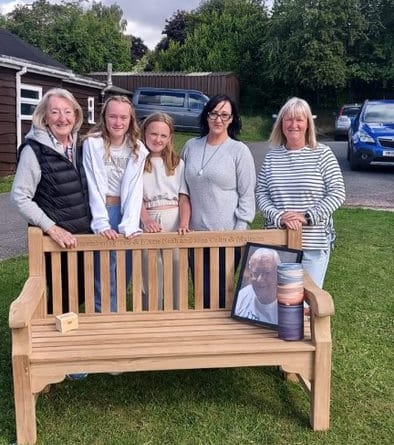 A MEMORIAL bench in honour of a great sporting family has been unveiled outside the Abergavenny Cricket Club pavilion.

The family of Glamorgan legend Malcolm Nash and brother Colin gathered at the clubhouse on Tuesday to scatter their ashes and install the bench in honour of the brothers and their parents Ted and Marie.

Abergavenny-born all-rounder Malcolm, who skippered Glamorgan in a 17-year career with the Welsh county, died in July 2019.

And brother Colin, a talented player for the club in the late 1950s and early 1960s, also sadly passed away last summer.

Man set to appear in court on arson charge

The club posted at the time of Colin’s passing: “It is with sadness that we report the loss of the last surviving member of the well known Abergavenny Nash family…

“The name is synonymous with Abergavenny CC as all four family members were prominent members of the club.

“Ted who both played and was the proud president of the club until his death, Marie who worked tirelessly with the ladies section, Malcolm who played for the club from an early age and went on to play for and captain Glamorgan, and Colin who played with distinction for many seasons as a very good all-rounder.”

Colin’s passing followed that of his brother two years earlier, with Abergavenny CC’s players holding a minute’s silence on the pitch before one of their games in Malcolm’s honour.

In 1968 as well as being part of a world record when he was hit for six sixes by West Indies skipper Gary Sobers at St Helen’s, he took 6-50 in 25 overs against Australia as Glamorgan defeated them for only the second time.

In the championship year of 1969 he took 80 wickets and scored 566 runs in first class cricket.

Architect Colin also captained Hornsey, where he moved to work and live, to the Middlesex title in 1981, and was their club president for many years, and was a qualified MCC playing member.